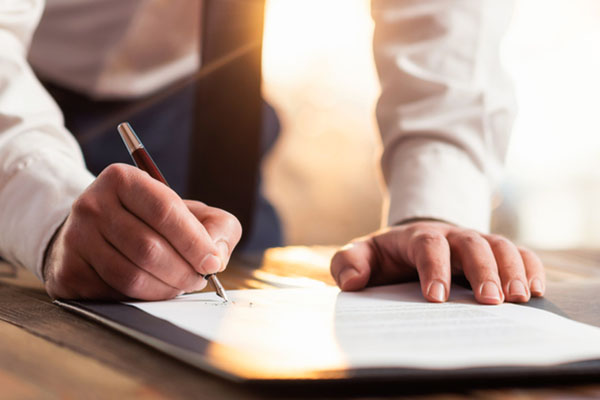 Following a gruelling nine-month negotiation process, the UK and EU finally agreed and signed a post-Brexit trade deal just a day before the transition period ended.

Although the UK officially left the EU on 31 January 2020, trade had continued on the same basis during the 11-month transition period. The two entities moved to new arrangements at 23:00 GMT on 31 December when the UK formally severed its ties with the EU.

Negotiations surrounding the ‘EU-UK Trade and Co-operation Agreement’ were concluded on Christmas Eve and the 27 EU member states gave written approval for the agreement on 29 December. The following day MPs overwhelmingly approved the deal in a parliamentary vote, with the bill backed by a Commons majority of 521 to 73.

That paved the way for European Commission President Ursula von der Leyen to sign the treaty in Brussels on the morning of 30 December and, later that day, the treaty was flown to the UK for Prime Minister Boris Johnson to sign in Downing Street.

Business groups expressed widespread relief that a deal, which preserves tariff and quota-free EU-UK trade for goods and components worth around £660bn, had ultimately been agreed. However, they also urged the government to provide quick and clear guidance to ensure trade and services can keep flowing.

Commenting on the deal, CBI Director General Tony Danker said, “This will come as a huge relief to British business. But coming so late in the day it is vital that both sides take instant steps to keep trade moving and services flowing while firms adjust. Immediate guidance from government is required across all sectors.”

The government has acknowledged the new relationship will involve ‘practical and procedural changes‘ and warned of ‘bumpy moments‘ for UK businesses as they get to grips with the new trading rules.

Minutes released after the final Monetary Policy Committee (MPC) meeting of last year has revealed the Bank of England’s (BoE) latest views on the state of the UK economy.

At its meeting ending on 16 December, the MPC unanimously voted to maintain its current monetary stance, leaving the Bank Rate unchanged at a historic low of 0.1%. The minutes to the meeting also stated the Bank’s latest thinking with regards to the likely future path for the UK economy.

Specifically, the minutes said, ‘The outlook for the economy remains unusually uncertain. It depends on the evolution of the pandemic and measures taken to protect public health, as well as the nature of, and transition to, the new trading arrangements between the European Union and the United Kingdom. It will also depend on the responses of households, businesses and financial markets to these developments.‘

While agreement over a post-Brexit trade deal has now removed fears relating to the anticipated negative economic impact of no-deal, the minutes do highlight remaining concerns surrounding potential problems as companies cope with increased paperwork, port delays and other effects linked to leaving the single market.

As in 2020, however, much of the UK economy’s fate over the course of this year will inevitably hinge on how the pandemic and measures to contain it evolve. In the minutes, the BoE notes that, while the impending mass vaccine roll-out bodes well for longer-term growth, the recent alarming jump in infections and resulting imposition of tighter restrictions will inevitably act as a drag on any recovery in the short-term.

This point was subsequently echoed by BoE Chief Economist, Andy Haldane, who expressed greater confidence about the economy in the second half of the year than in the first quarter, predominantly due to the prospects for rolling out COVID-19 vaccines.

As December drew to a close, leading global markets finished the month in positive territory. Year-on-year, a more mixed picture was evident. In the UK, the FTSE 100 ended the year down 14.34%, the index’s worst year since 2008, as soaring virus cases weighed on sentiment. Despite this, in the last trading week of the year, shares closed at their highest since the pandemic prompted a market retreat last March, as investors welcomed the post-Brexit trade deal.

After the Brexit Bill passed through Parliament on 30 December, sterling continued its recent gains against the US dollar. Growing optimism that the UK can overcome the pandemic and move on
from Brexit, drove the pound to a two-and-a-half year high against the dollar. The FTSE 250 closed the year down 6.38%, while the AIM closed the year up over 20%.

On Wall Street, despite the economic strain inflicted by the pandemic, the Dow reached a record closing high at the end of December, ending the year up over 7%, while the NASDAQ closed 2020 over 43% up; Big Tech and software stocks were among the strongest performers of 2020. Heading into the New Year, hopes for a rebound in economic growth in the US are being buoyed by the vaccine roll-out and the recently approved $900bn stimulus package. The Nikkei 225 ended the year up 16.01%, meanwhile the Eurostoxx 50 closed the year down 4.63%.

Brent crude closed the year trading at around $51 a barrel, an annual loss of just over 23%, as the pandemic weighed heavily on demand. A recent poll of oil analysts revealed expectations that the oil price is unlikely to mount much of a recovery in 2021 as the new virus variant and related travel restrictions threaten already weakened fuel demand. Gold is trading at around $1,898 a troy ounce, a gain of over 25% on the year. In December, gold gained as the US dollar reached a low, not seen since April 2018.

The latest official set of labour market statistics has revealed a further increase in the rate of unemployment, with redundancies rising to record levels.

According to data recently released by the Office for National Statistics (ONS), an estimated 1.7 million people were unemployed in the UK between August and October 2020. This left the unemployment rate at 4.9%, the highest level in over four years. The data also showed a record rise in redundancies, with a total of 370,000 reported over the same three-month period.

More recent data released following a BBC Freedom of Information request, has revealed a subsequent decline in redundancies after the Chancellor belatedly announced an extension to the furlough scheme. Those figures, collated by the Insolvency Service, suggest that a total of 36,700 redundancies were proposed in November, the lowest monthly number since lockdowns began in March.

However, while government support scheme extensions may limit the near-term rise in unemployment, the ongoing imposition of tighter coronavirus restrictions is expected to continue denting employment prospects over the coming months. A further weakening in the labour market therefore seems inevitable, with BoE projections suggesting the unemployment rate could peak at almost 8% during the second quarter of 2021.

Lower prices for clothing, food and non-alcoholic drinks triggered a surprise fall in the UK’s headline rate of inflation according to the latest official statistics.

ONS data showed that the Consumer Prices Index (CPI) 12-month rate – which compares prices in the current month with the same period a year earlier – fell to 0.3% in November. This was significantly lower than the previous month’s figure of 0.7% and close to August’s near five-year low of 0.2%. It was also considerably below analysts’ expectations.

The largest downward contributor was clothing, as weak demand due to coronavirus, forced retailers to cut prices and offer bigger than usual discounts in Black Friday sales. Additionally, both food and non-alcoholic drink prices unexpectedly fell in November, despite increasing demand, as most parts of the UK returned to lockdown.

While a weak economic backdrop is likely to see inflation remain comfortably under the BoE’s 2% target over the coming months, there are areas of inflationary concern. Reversal of the temporary hospitality VAT reduction, for instance, will push up inflation from April. Similarly, fuel prices are likely to have an upward impact on the CPI rate once last year’s price plunges begin to drop out of annual comparisons.

It is important to take professional advice before making any decision relating to your personal finances. Information within this document is based on our current understanding and can be subject to change without notice and the accuracy and completeness of the information cannot be guaranteed. It does not provide individual tailored investment advice and is for guidance only. Some rules may vary in different parts of the UK. We cannot assume legal liability for any errors or omissions it might contain. Levels and bases of, and reliefs from, taxation are those currently applying or proposed and are subject to change; their value depends on the individual circumstances of the investor. No part of this document may be reproduced in any manner without prior permission.