An economist’s perspective on 2021… 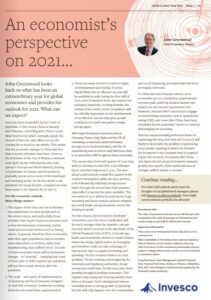 An economist’s perspective on 2021…

2020 has been dominated by the Covid-19 pandemic. It first struck China in January and February, coinciding with China’s Lunar New Year festival which normally signals the closure of factories and offices across the country for as much as two weeks. This meant that the economic damage to China was less than it would otherwise have been. Even so, the lockdown in the city of Wuhan continued until April. By late February the virus had spread to Europe and North America, leading to lockdowns in Europe, and from there it gradually spread across most of the developed and emerging world. As the first world-scale pandemic for many decades, comparisons have been made to the Spanish flu of 1918-19.

2. The scale – and speed of implementation – of monetary and fiscal measures designed to deal with economic downturns resulting from the virus have been unprecedented.

With major European economies such as Germany, France, Italy, Spain and the UK all embarking on new nationwide lockdowns (as opposed to local lockdowns), and the US experiencing new records in daily infections, there is no immediate relief in sight for these economies. This means that the fourth quarter of 2020 may well see declines in real GDP, to be followed by an uncertain trajectory in 2021. The year ahead could include a weak first quarter in the northern hemisphere while the virus persists, to be followed by relatively strong bounce backs through the second and third quarters, especially if a vaccine becomes available. The recoveries in 2021 will be boosted by the huge monetary and fiscal stimulus policies adopted by central banks and governments across the developed world. For this reason, the recovery in developed economies, once the virus is dealt with, will be much stronger than the anaemic, sub-par recovery which occurred in the aftermath of the Global Financial Crisis (GFC). A decade ago, banks and households needed to repair balance sheets by raising capital and/or de-leveraging and therefore could not take advantage of low interest rates to expand borrowing and spending. On this occasion there is no such problem. On the contrary, encouraged by the monetary and regulatory authorities, broad money and credit have, for the most part, been growing strongly in leading economies. This explains why equity and housing markets have been so buoyant. Such a background almost invariably leads to strong growth of spending – but this will only happen once the uncertainties and social distancing associated with the virus are largely overcome. In China and east Asia, by contrast, most economies are on a steady but unspectacular recovery path, aided by modest interest rate reductions and reserve requirement cuts.

However, few have felt it necessary to engage in extraordinary measures such as quantitative easing (QE), and some, like China, have been restrained by the authorities’ desire to continue deleveraging the economy. Asia has unquestionably performed better in suppressing the virus, but now and in 2021 it will likely be faced with the problem of generating an economic upswing in which the demand for its exports is less buoyant than in a typical export-led recovery. Economies like China and Japan should see good domestic demand growth, but exports, their traditional area of strength, will be slower to recover.

For John’s full outlook and to hear the thoughts of our global fund managers, please visit invesco.co.uk/2021outlook. How might our investment portfolios be affected? Investment risks

The value of investments and any income will fluctuate (this

may partly be the result of exchange rate fluctuations) and

investors may not get back the full amount invested.

Where individuals or the business have expressed opinions,

they are based on current market conditions, they may

differ from those of other investment professionals, they are

subject to change without notice and are not to be construed

RG9 1HH, United Kingdom. Authorised and regulated by the